A day in the hills (part II of “Transylvania travels”) 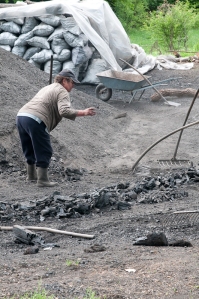 Today was quite unlike any other day of holiday – ever.  And in a good way.  I’m not sure we “did” very much by tourist standards, but therein lay much of the beauty.

We woke around 6.30am, and about half an hour later we went for a stroll through the village.  The older children were waiting by a telegraph pole at the central croosroads, which doubles as a stopping point for the school bus.  The younger children soon started the morning walk to their school which is in the village itself.  By around 8am we were hungry, and returned to the house for a breakfast of bread, a wonderfully smoky sheeps’ cheese, cured bacon fat, cucumber and a variety of honeys and jams including a tasty rose hip syrup.

A little after 10am we left with Csaba for a walk in the hills.  After a slow amble out of the village we abandoned the road, such as it was, for a rough track which led across a field and into an avenue of poplars.  There we were met by the family of charcoal burners, who had learned their skills from their parents and had been working between March and December in the same spot for around nine years.

Mother was tending a smoking mound of wood several feet high, covered with sand to ensure that the wood smoldered rather than burned.  She would pull off a section of sand, scrape out the charcoal with a fork, and toss asside any insufficiently burned wood to be “re-cooked” before covering the heap with sand again.  Even from a few feet distant we could see that it was hot and dirty work, and her face was covered in charcoal dust which broke off when she smiled or spoke for a few seconds to explain (via Csaba as translator) what she was doing.

A little further along the track, next to the tiny caravan they called home, father was working together with a younger man I took to be their son.  They circled a pyramid of wood some 15 feet high, formed from neatly stacked logs each about four foot in length.  Each densely packed pyramid, they told us, took about two weeks to build and two weeks to burn, yielding about 12 tonnes of charcoal.  As they were paid about £30-40 per tonne, they were hardly making a lavish living but, in what is often a very poor country, at least they could say they had some skilled work.

We walked on for another hour or so, climbing at times quite steeply through a wood of oak, beech and hornbeam, until we reached a high ridge still amongst the dappled light of the trees.  The charcoal burners’ dog was with us, having followed us from their camp, periodically plunging into the trees only to reappear as if by magic some several minutes later.  After pausing on the ridge, we turned and retraced our steps to Viscri, the dog following us as far as the camp where (no doubt) its lunch awaited.

So too did ours, back in Viscri.  Thick slices of ham fired in egg with a mountain of crunchy pickled lettuce, again washed down with wine and cherry brandy.

After lunch we headed out a second time, to find the blacksmith’s cottage on the edge of the village.  A Roma gypsy, the blacksmith was following in the steps of his grandfather who had set up a forge in the village in the early 1970s.  Taking us to his forge, he threw down what looked like a shovelful of cold charcoal which, within seconds, he had coaxed into flame with a massive hand-powered bellows.  He proceeded to fashion for us a perfectly formed miniature horseshoe together with a hand-made nail on which to hang it.  All the while, his children played with the lambs in the garden outside, while the family pig snuffled quietly in its pen next door.

Leaving the blacksmith, we headed for the village’s highest point, the fortified Saxon church on a hill, dating back well over 500 years.  Within this double-walled fortification, every villager once had a dedicated living space where they could head in the event of attack, and where supplies of food and access to water meant they could hold out in the event of siege.  A dark and narrow stone stairway wound to the top of the tower, where commanding views showed just what a strategic defensive poisition this was.

Leaving the fortress, we again headed into the hills with Csaba, pausing at our first high point to sit, lie back, chat and enjoy the expansive peace of this magical place.  Then we climbed higher still until, mounting a ridge, we were suddenly faced with a stunning view.  Immediately before us rolling pasture land dotted with wild violets fell away to trees below; while beyond, row after row of ridges stretched away, first in deep green, then a paler yellow, then grey and blue as in the distance the Carpathian foothills marked the horizon.

We climbed back down to the village with the sun slowly sinking below the ridge behind us. The gentle, muted clang of the cow bells accompanied us as we passed through the village herd on its way home, before we sighted the tower of the orthodox church and were back at the edge of the village again.  A group of elderly women sat on their front step knitting and chatting; two young girls jumped over a string which they had stretched around a tree; a horse and cart shambled lazily up the hill with a family on board; while an elderly couple sat quietly together, catching the last of the sun’s heat as it reflected off their front wall.  Whilst in many ways so poor, I felt in some strange way that these people were possessed of a great wealth and that, in a very real and profound sense, I was indeed home.